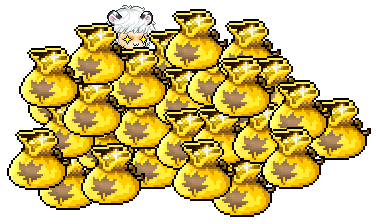 There is a variety of ways to make mesos now then there was before and these are the methods ill be going through in this guide.

Boss crystals is one of the easiest ways to get pure mesos. They are dropped from all bosses and can be handed to the NPC in FM The Collector

There is a cap of 50 you can hand in per week so do take note of handing in the ones worth the most mesos.

Daily bosses give quite alot of rewards boss crystals being one the other being master and meister cubes. Nexon has raised the drop rate of these cubes so they will drop more often from bosses. I also recommend stock piling Rebirth Flames Lv. 110, 120, 130, 150 and selling them in bulk in AH

Weekly bosses aka hard and chaos boss crystals provide more mesos then dailies and it is recommended to do as many as possible weekly.

Que up for bosses via party window Boss tab ask alliance for ques. If you still cant kill all of the daily bosses see if you can partner up with someone for them. Do note that the crystals will sell for less if more then 1 person is killing the boss

Doing these weekly quests give diffusion-line energy cores and twisted stigma spirit stones. These items + the boss items can be traded for coins that can be used to purchase absolab equipment. You can choose to keep or sell in auction house for mesos for profit.

Do Ursus daily during Golden Time. Ursus provides 15m+ a day by doing the boss 3 times. To enter ursus go to a dimensional portal and choose ursus the almighty talk to the npc inside to accept the lightbulb quest and your set to go for the boss. Golden times can vary due to daylight savings time but for now it is currently at 8pm EST usually at 9pm EST and 2pm EST usually at 3pm EST.

Commerci provides denaros which can be used to buy sweetwater tattoo and sweetwater monocoles at epic tier potential. They are known to be the best in slot currently for face and eye.

You can sell them as is or use occult cubes to get 12% of any stat or use for yourself or tier to unique with smithing profession cubes.

Check out the guide on how to do commerci

You can also solo commerci for cubic blades and party with 3 people for a higher chance at drops. These runs count separate and can be done daily. Sweetwater Katara can sell for quite a bit since it is the best in slot for Dual Bladers.

Hellux has now changed and carries are now possible since the drop rate for coins is individual instead of shared. Try joining up someone who is providing carries in alliance. Each run can give 20-30 coins a run and can be run daily.

Buy reinforced/superior gollux rings and pendants with the coins or use on scrolls. Either use for yourself or sell in AH after tiering them to Epic potential+

A variety of services can be offered to other players but do note trust is needed to sell services. The legion coin shop is one way to sell services. Items such as epic potential scrolls and clean slate scrolls can be sold as a service or used on your own equipment. Be sure to have characters placed in your legion grid so they can fight bosses for you 24/7 for legion coins. You can also sell gollux scroll services.

Here is a guide to legion

So if you have the time and patience doing everything on one more character will reap you more earnings.

I will update the guide as time goes by but these are some recommendations I have for people who are returning or looking for ways to make mesos. Hopefully this helps anyone who is in need of funding